jhaelan's house in Singapore abusing his bandwidth. Flying on to Kuala Lumpar tomorrow morning. I have changed my plans slightly and will now skip Bangkok after Ho Chi Minh City because of the flooding and what follows after the cut.


So the other day a cyst ive had for a while obviously got upset and got a lot larger. Large red angry hard blobs on your chest are not good. The day after it started leaking pus. The day after that I went to Singapore General A&E since if nothing else I needed some antibiotics after having talked to my mum.

First they got a bit worried about my blood pressure. Yes mine is borderline high but I probably also get white coat syndrome and being worried about a pus discharging lump on my chest probably didnt help and the beeping because it was high.

Then the junior doctor got a bit freaked out by my burst sebaceous cyst and that I was still travelling and wanted to continue to do so. The senior one was less worried and said they would drain the pus by making an incision which they wouldn't be able to stitch up to make sure stuff drained afterwards. They warned it scar. Im not worried about scars and indeeed even stuff ive had stitched before has scarred anyway.

The dressing needs changing every 2 days and and i have an open would with gauze in it currently to keep it open. Also the kind of antibiotics you cant mix with alcohol. the joy of having a penicillin allergy due to having had glandular fever.


So and open wound in a city which has been flooded doesnt seem a good idea. I migth even come back early depending on how things go the next couple of days.


After the medical stuff I went and watched some of the singapore sevens at the singapore cricket club. Then went for chilli crab with 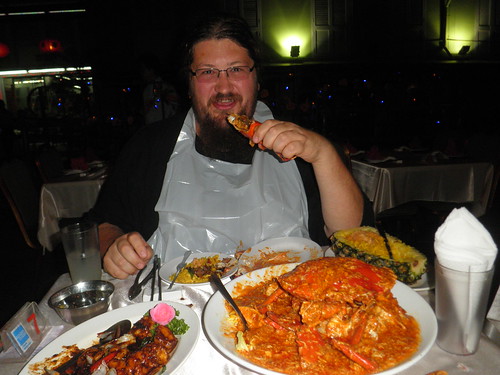 We then went toa MindCafe where

jhaelan beat me twice at scrabble even though in one game I had a 7 letter word. I blame the drugs :)